The Honda Super Cub: A Practical Bike for Everyone 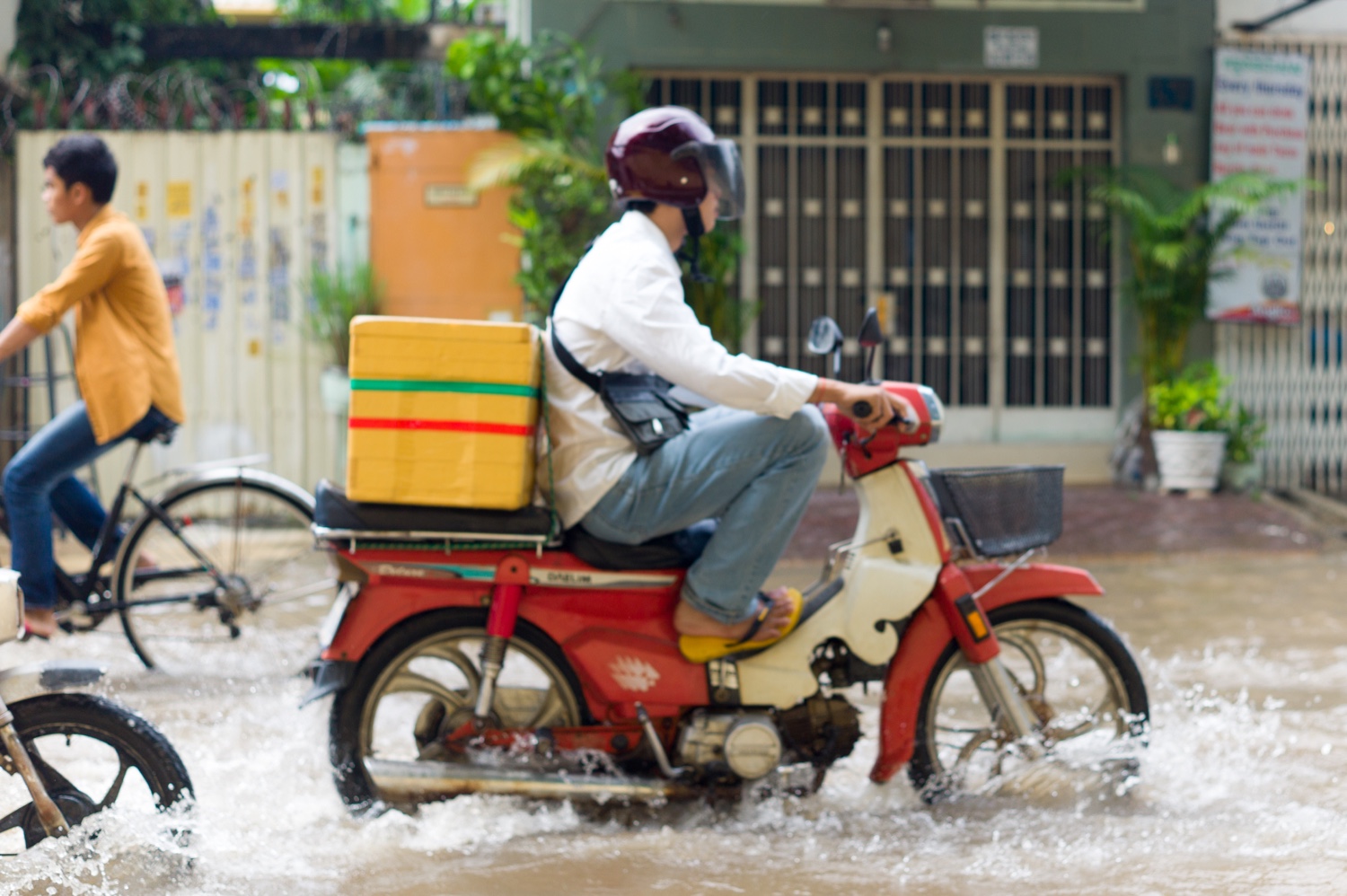 Riding a motorbike in the rain. Phnom Penh, Cambodia.

Post World War Two Japan needed a reasonable vehicle for the average Japanese citizen to drive. They needed something that was cheap, could handle messy undeveloped roads, and was stable enough to use as a delivery vehicle.

What they developed is a fascinating bike, the Honda Super Cub. The Super Cub was a fully rethought motorbike design from tires to handlebars. It was a new category of bike: bigger than the pedal bikes to which people had been mounting external engines (see Honda Cub F), but smaller and cheaper than the full on motorcycles of the day.

“His concept was a two wheeler for everyman, one that would appeal to both developed and developing countries, urban and rural. The new motorcycle needed to be technologically simple to survive in places without up to date know how and access to advanced tools or reliable spare parts supplies. The common consumer complaints of noise, poor reliability, especially in the electrics, and general difficulty of use would have to be addressed.” - Wikipedia

It took Honda two years time to develop the Super Cub, but it went on to be the single highest volume selling motor vehicle in history. This week I bought it’s natural evolution, a Daelim Citi 100cc, and I’m fascinated.

Backing up a bit, what made the Honda Cub so revolutionary?

First, at 17 inches, the tires were a new size large enough to go through potholes and bad streets but small enough to be easy to maneuver in cities. Wikipedia’s article on the Honda Cub details the trouble engineers went through acquiring a 17 inch tire, eventually cutting apart existing tires and re-forming them to 17 inches for testing. Until a tire manufactrer agreed to make 17 inch tires Honda almost abandoned the project.

Second, the bike needed a low center of gravity for stability. Existing bikes often mounted the engine in the rear, moving a bike’s center of mass far back. The Honda Cub mounted the engine right by the driver’s feet giving a good weight distribution. Combined with larger tires this made it feel more like a traditional bicycle – making the motorbike more accessible to the general public.

Third, a standard of quality for the handling of the bike was that someone could drive it one-handed while holding a tray of soba noodles in their other hand1. I love this kind of insanely specific product requirement – such a specific vision makes success and failure clear, which I think is essential to designing a good product.

Finally, to market this bike Honda developed an entirely new type ad campaign with the slogan “You Meet the Nicest People on a Honda.” This was considered the invention of lifestyle marketing.

“The ad depicted housewives, a parent and child, young couples and other respectable members of society - referred to as “the nicest people” - riding Honda 50s for a variety of purposes. Moreover, the colorful illustration and highly professional design appealed strongly to the public. Those who would otherwise have rolled their eyes at the word “motorcycle,” and those who previously had no interest in them, soon saw in the motorcycle a new purpose: one of casual and convenient daily transportation.” - honda.com

In my mind all of these factors combined to give the Super Cub a clean, simple, and honest design before they were catch words used for apps and computers. If anything this feels like how Apple would have made a bike in 1958 if Apple were a motorbike company.

The design, marketing, and enormous success of the product is stunning. There have been than 60 million Honda Super Cubs sold which is fifty percent more than the top selling car of all time, the Toyota Corolla.

As far as I can tell Honda still makes the Super Cub (about $1,600 new in Mexico) but has updated its design and added cost. Daelim, a Korean company, collaborated with Honda to clone the Cub into the Daelim Citi bike and still sells them with essentially the original design new for only $700 in Cambodia (probably closer to $350 in a country with less aggressive taxes). 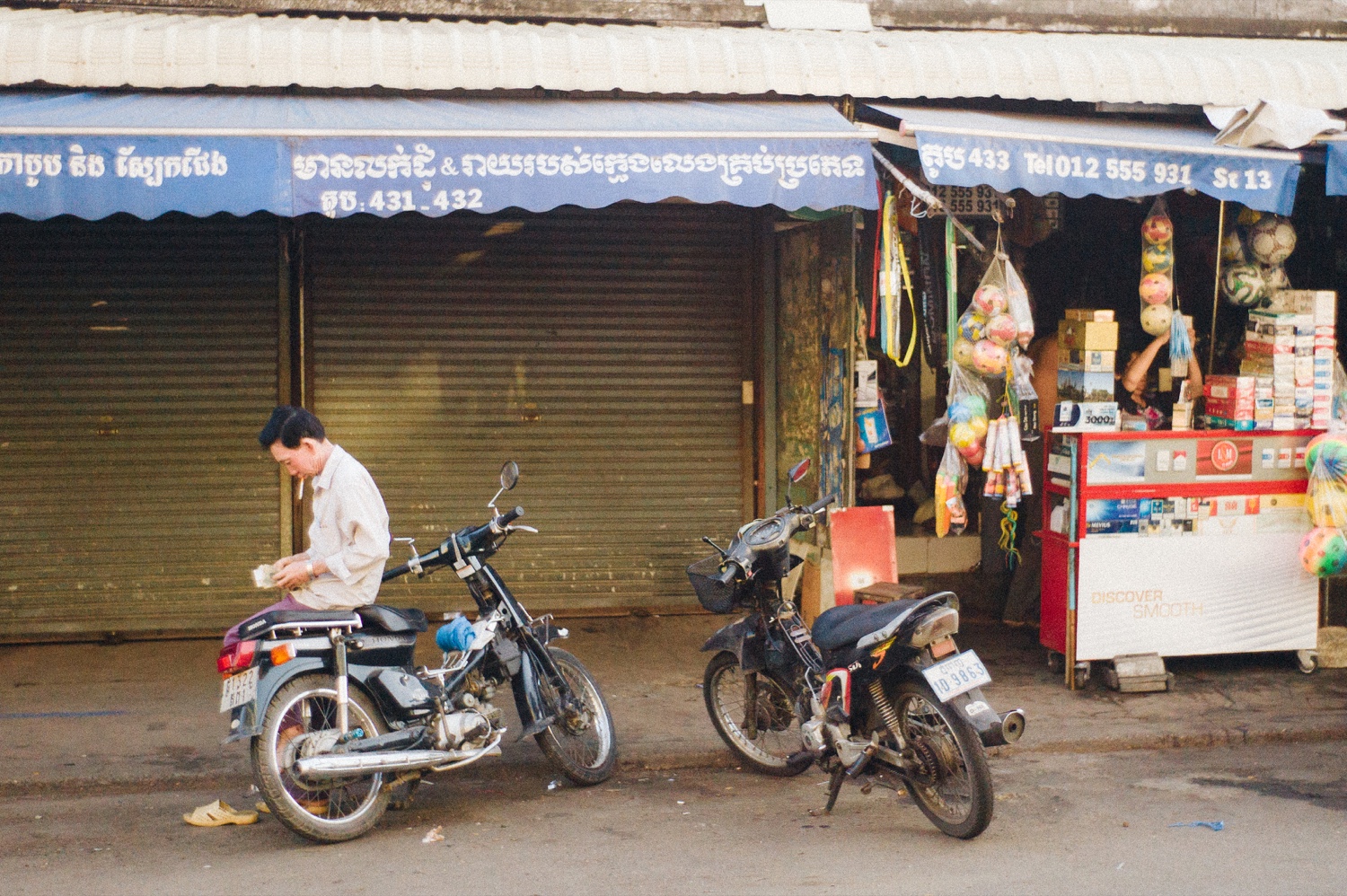 A man resting on a Honda bike, aesthetically identical to the Daelim Citi.

As a result of being cheap, reliable, and almost obvious to fix Honda Super Cubs and clones are all over Cambodia. I see single men and moto taxi drivers using them. I see them fashioned to pull trailers full of leaves, mattresses, and piles of garbage. My favorite sight is seeing a whole family riding one: often arranged front to back with a stark naked child standing in front of the the father, the mother behind the father, and another baby wedged between the two parents.

The Daelim Citi/Honda Cub is also a hackable bike. It’s frequently used as an engine for tuktuks — three wheeled carriages driven for mass transit. I’ve seen a single 100cc Daelim Citi pulling a tuktuk with eight locals. This would likely cause the engine to overheat without extra cooling, so most tuktuks I’ve seen which use a small engine bike like a Daelim as the base also rig a system to drip water over the engine. 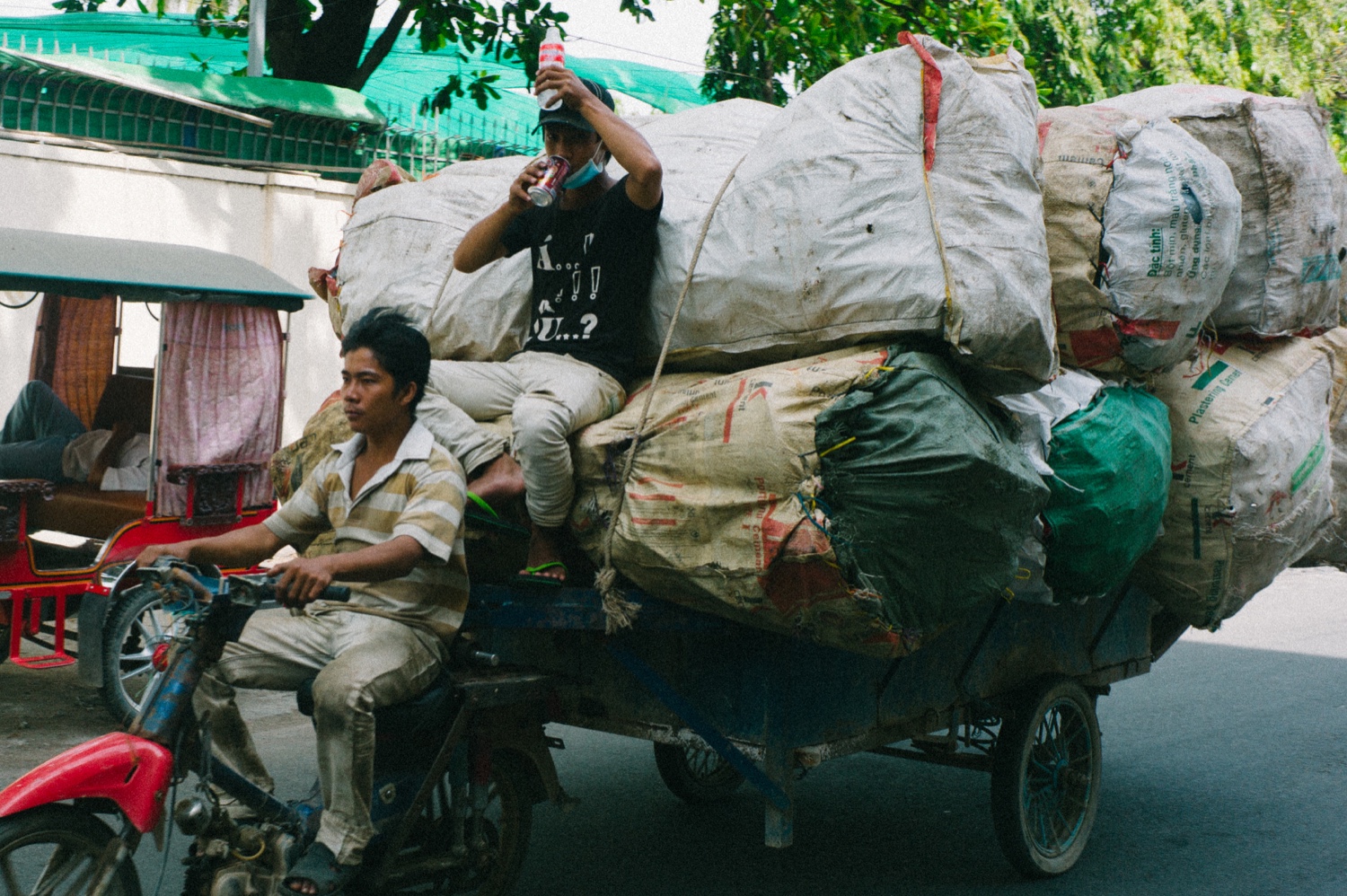 A Daelim clone in Phnom Penh, Cambodia with a trailer. 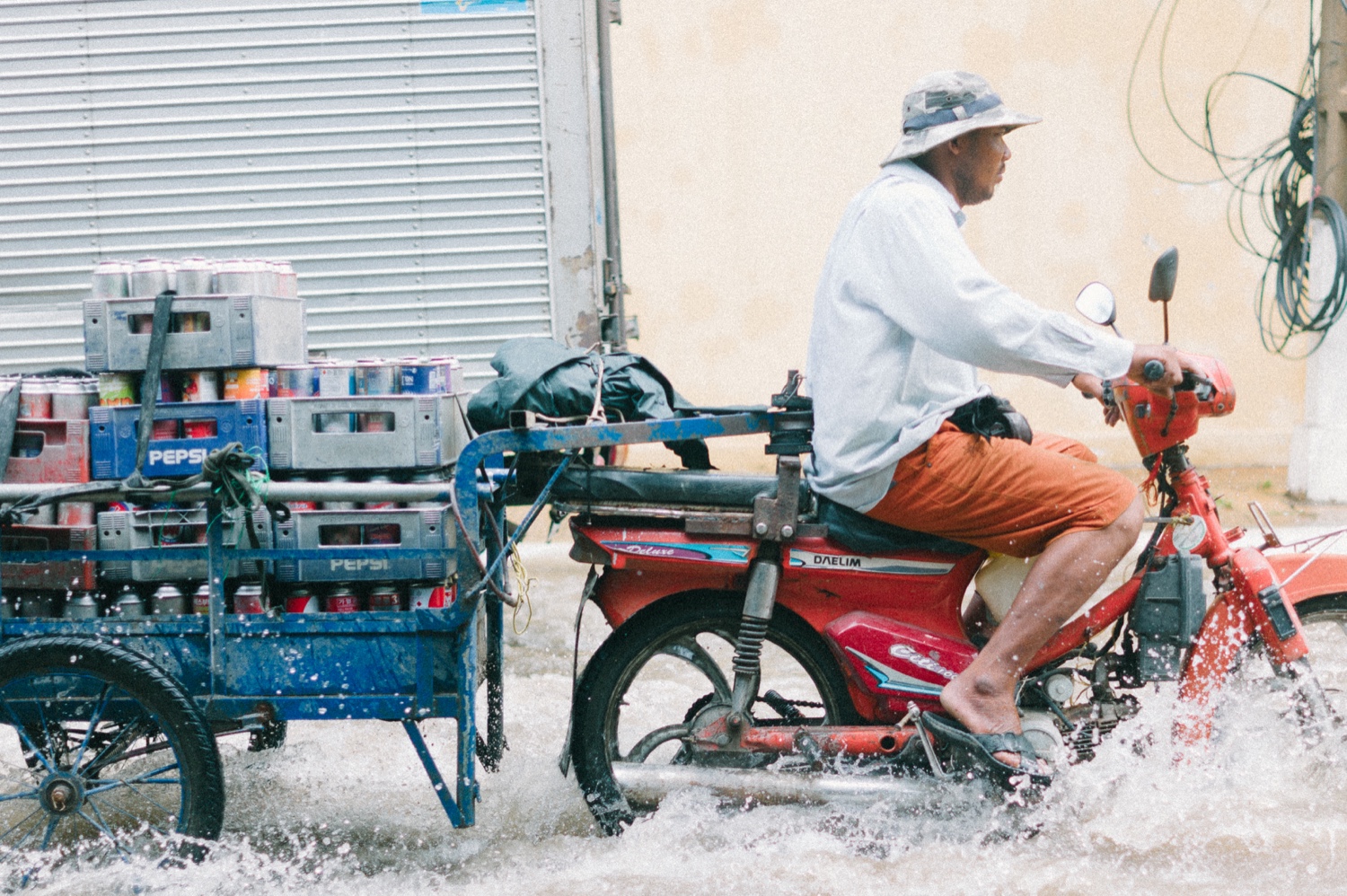 A Daelim clone in Phnom Penh, Cambodia with a trailer.

Bikes are clearly the leading way to get around Cambodia. A 90% import tax on vehicles means that a basic Daelim 100 costs almost $700 brand new — mine was $440 used. In Vietnam the same bike would go for about half of that price sans-tax. Since the averaged Cambodian city dweller makes only about $100-$300 per month the bikes here tend to be small and inexpensive.

What else do you see on the streets of Cambodia? A surprising number of nice cars. I’ve spent the past few days familiarizing myself with Phnom Penh traffic and there are plenty of Toyota Land Cruisers, Lexuses, and a few high end Mercedes. My first impressions are that traffic Cambodia style — no traffic lights and a total free for all — only works well if 95% of traffic is on a small bike. The cars suck.

Who can afford these fancy cars? Everyone tells me that the richest people in Cambodia work for the government. 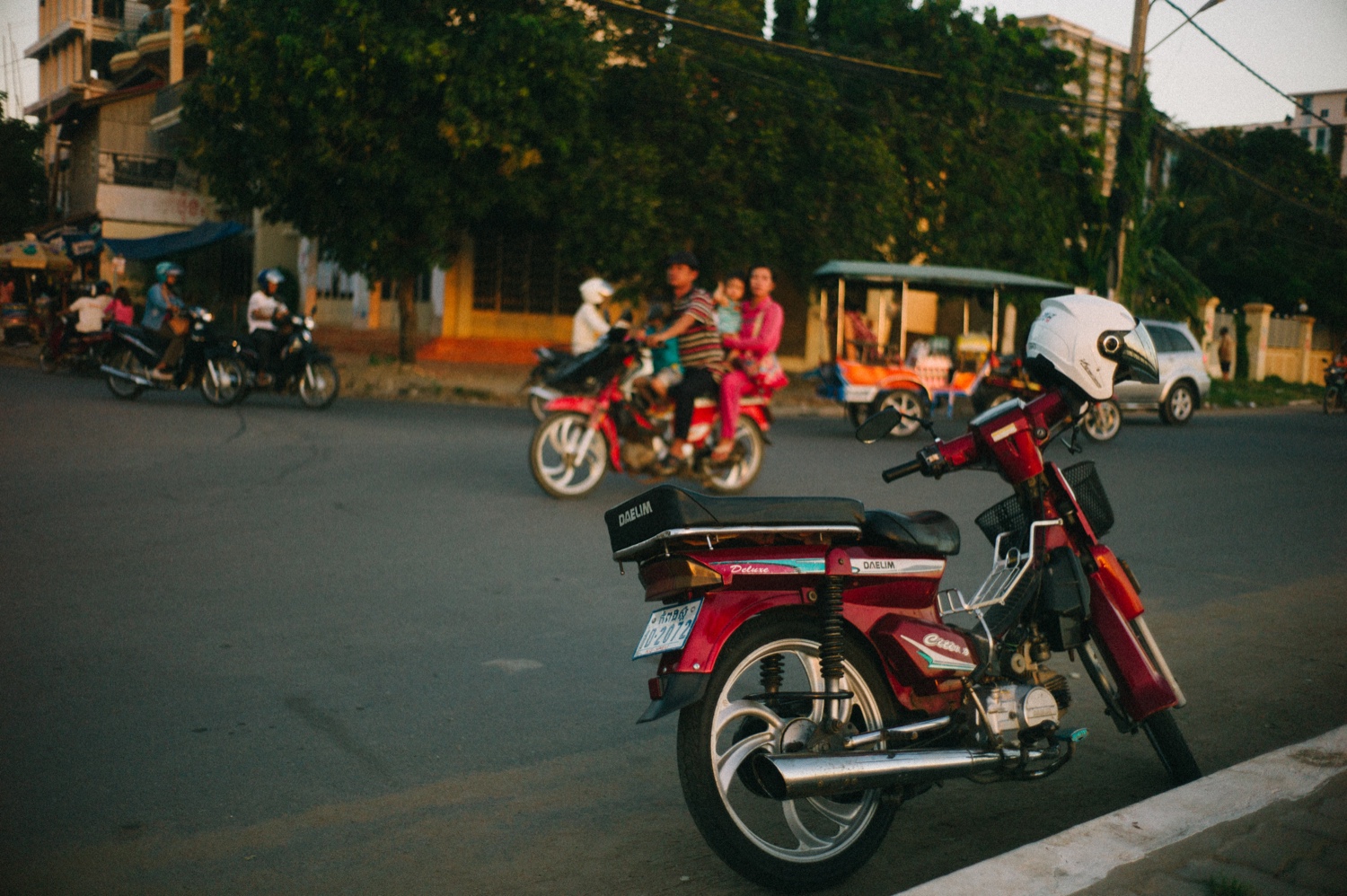 My Daelim Citi 100cc parked in Phnom Penh. A family of four riding the same bike headed in the opposite direction.